Network She Awards are Four

Network She celebrated its fourth birthday 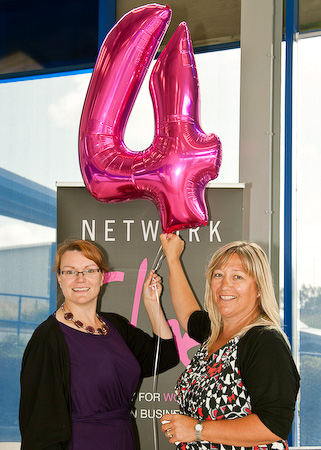 “It has been great to hold a networking meeting at the Peugeot garage, we had a fantastic talk from Rachel Owen a racing driver instructor from ‘Anglesey Circuit’ and have celebrated the achievements of local business women as part of Anglesey Business Week,” says Ruth Lloyd-Williams founding Director of Network She.

The event was also a call for nominations to the ‘Network She Awards 2011’. “Winning a Network She award last year was fantastic, it’s lovely my hard work was recognised and as well as the ‘feel good factor’ it provides a business boost,” said Jo Quinney, last years ‘Anglesey and Gwynedd Business Woman of the Year 2010’. Jo joined Ruth in requesting friends and colleagues send in nominations for the ‘Network She Awards 2011’.

The annual Network She Awards are open for nominations until 14th October with the prestigious awards ceremony taking place on 18th November at Venue Cymru, Llandudno. “We recognise and reward the inspiring achievements of business women, who have succeeded and continue to succeed in their chosen field during such difficult, turbulent and unpredictable times,” said Ruth.

Network She is designed to meet the needs of women in business and those aspiring to go into business across the UK. “Our awards now cover most of the UK and if you know an inspiring business woman, please nominate her. I am proud we are holding our awards ceremony in North Wales where we began, we have come a long way in four years,” says Ruth.