Any story which has…

…a baddie called Mr Dafodrill, a woman wronged and an angel who grants three wishes sounds like a soap opera. This is the story of St Dwynwen, who is the Welsh patron saint of friendship and love, a bit like St Valentine.

It is said that Dwynwen, who lived during the fifth century, was the beautiful daughter of King Brychan Brycheiniog, the legendary King of Breconshire. She fell in love with Maelon Dafodrill but her father forbade them to marry. In anger, Maelon raped Dwynwen and left her.

In her distress, she begged God to help her forget Maelon. Dwynwen was visited by an angel who gave her a potion to give to Maelon. He was turned into a block of ice and the angel granted her three wishes.

Dwynwen’s first wish was to thaw Maelon, her second was that God would fulfil the hopes and dreams of all true lovers, and her third was that she would never marry. All her wishes were fulfilled and Dwynwen devoted herself to God for the rest of her life, preaching and establishing many Christian churches.

She founded a convent on the island of Llanddwyn (Dwynwen’s church), off Anglesey. It is lovely to walk along the beach at Newborough Warren to the remains of the thirteenth–sixteenth-century church at the site of her convent.

A well on Llanddwyn was dedicated to her following her death (about 460AD) and became a place of pilgrimage. You could ask the sacred fish or eel who lived in the well to predicted your future. If the water of the well boils, it foretells love and good luck for the visitor.

St Dwynwen’s Day is celebrated on 25 January and I have bought a marvellous Dyfal Donc card by Rebecca and Morgan from our local Welsh bookshop, Anwen Menai. 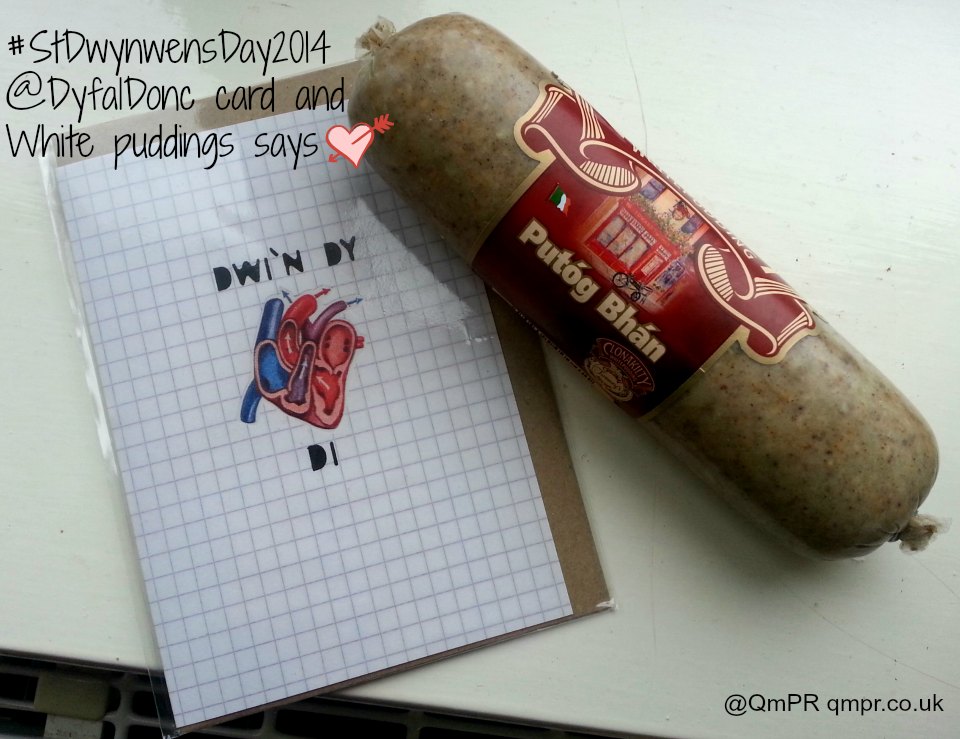 So from me to you on this auspicious day, a big sws/kiss!