This year we were out again surveying at Porth Neigwl or Hell’s Mouth, Llanengan near Abersoch, Llyn Peninsular, Gwynedd for The Marine Conservation Society (MCS) Beachwatch Big Weekend The team included Jo Quinney from QmPR and Jacki Clark who are MCS members and Sea Champions, the Clark family and great volunteers from Salford who were staying at Penrallt Coastal Campsite for the weekend, all joined the surveying team. 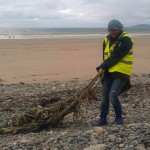 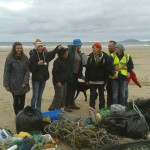 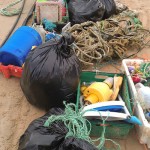 (Middle photo thanks to Chris Clark)
Penrallt Coastal Campsite had carried out some research of the strand line, a few days earlier, and indicated there wasn’t much marine litter to collect. There had also been a clean up by Surfers Against Sewage the week before, go surfer dudes.

The bad news
Although there was less beach litter about the usual suspects remained,
Fishing litter – including fishing crates, line, nets, rope and pieces of nets
Sewage-related debris (SRD) – including cotton bud sticks, they look like lolly sticks but they are cotton buds flushed sown the loo which find their way to the sea.
Welsh Water refers to SRD as ‘The Dirty Dozen’ don’t use toilets as bins.

Following the survey of the 100m stretch of beach, identifying and counting every item we find, we decided to beach comb further south along the beach to bin as much beach litter as possible. All beach litter was removed and placed in the beach litter bins in the beach car park. The fishing crates where placed beside the bins and some friendly surfers decided to recycle these items , “They will make great baskets for fire wood,” they said. All fishing crates with identifiable text were noted down and passed to the MCS to follow up.

Beach litter was surveyed, a fishing rope monster was removed and the friendly surfers recycled some items. A great day was had by all and I a few pints of Mws Piws were drunk in the evening.